World War II ended European hegemony over the rest of the world, and over Europe. The Great Powers of Britain, France, and Germany were now diminished in their power and influence by forces outside of Europe. The United States and the Soviet Union now set a new dichotomy between East and West in both military power and ideol0ogical systems. 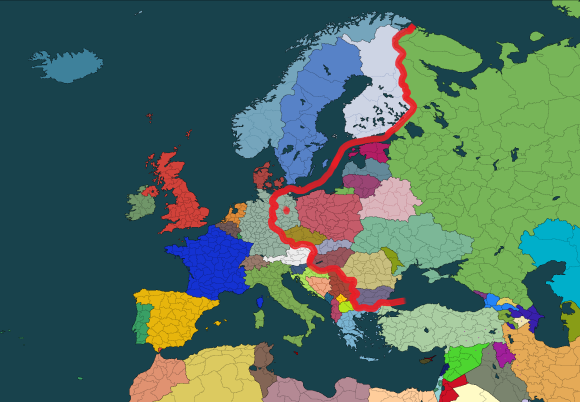 The Cold War period began in the turmoil after World War II. From the Soviet Union Stalin remarked on the new state of the world, “This war is not as in the past. Whoever occupies a territory also imposes on it his own social system. Everyone imposes his own social system as far as his army can reach. It cannot be otherwise.”[1]

Eastern Europe could do little against the might of the Red Army, and Western Europe could only hope to rely on the United States to defend against a soviet invasion. The Brutal Peace Europe saw in the years following the end of the war saw a massive shift in European demography and populations. This was not achieved in any civilized manner as close to ninety million people were either killed or displaced throughout Europe between 1939 and 1948.[2]

The surviving nations faced new challenges but new prospects as well because they were granted time. Time that would be used to adjust into the new state of things and to eventually grew economically and socially into the nation states as we recognize today.

The Sun Finally Sets on the British Empire

Robert Paxton notes that contradictory post-WWII Europe was “engaged in continuous warfare from 1945 through the Early 1960s against nationalist rebellions in their overseas territories.”[3] Empires such as that of Great Britain shrank back to their pre-imperialist domains. Abroad, Great Britain was entangled in costly struggles with its former colonial processions from Guyana in South America to Iran in the Middle East. This would not last as decolonization became more popular in Britain starting with its colony in India which was split in two nations, India and Pakistan, in 1946. Following shortly, British policy had turned dramatically to decolonization in the empire with the intention of turning colonies in independent nations who would serve as allies in a unified economic bloc.[4]

At home, Britain faced economic challenges and a new shift towards social welfare policies. Economic stagnation and unemployment had troubled Britain since World War I. In the inter-war period, now less than 10 percent of British Workers were unemployed effecting up to 2 million families.[5] After two world wars, Britain had to import most of its food, fuel, and raw materials as it lost income derived from foreign colonial investments.[6]

Robert Paxton says, “Under these conditions, British recovery depended on getting the British people to work as hard as possible and consume as little as possible.”[7]  To alleviate working class grief, a new social welfare state arose to provide healthcare and education to those who could not afford it. In 1948, Hospitals were nationalized, while still allowing private practice, and the English Act of 1944 allowed for some form of free secondary education.[8]

Destruction of Social Fabric of Society

Reconstruction after World War II would not be the same as after World War I. European society had been beaten so severely that it was left malleable without the ability to regain its former institutions and ideologies. Unlike the reaction after the Great War there was not attempts to return to ‘normalcy.’ Reconstruction after 1945 was, according to Mark Mazower, “a very different enterprise from that of the 1920s: this time, there could be no thought of going back. Wartime losses tore gaping holes in social and physical fabric; they proved bitter memories and angry emotions, but also new challenges and opportunities.”[9]

The Physical damage to Europe was obvious, as cities lay abandoned or in ruins in the years after the war. The social fabric of European society was in as much damage and disarray, leading to hundreds of thousands of orphans, people mistrustful of any authority, and the idealism that marked pre-WWI and inter-war Europe had given way to disillusionment. One survivor of the war, a Czech woman, wrote to a friend,

“We have to realize that the [German] occupation produced cowards as well as heroes. During the years when young people were growing up, morals were inverted; evil was often shown to be more profitable than good and lies more profitable than the truth. Those who grew used to whispering cannot speak out naturally now; they either shout or whisper…It is not easy to expel fear from the hearts of the people of the Continent.”[10]

Chat History with Alex and Peter of “History’s Most” Podcast